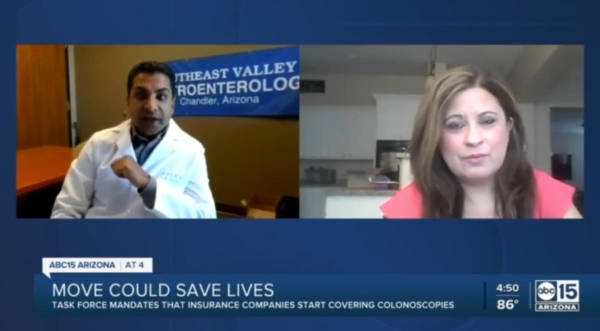 Unless something changes, by 2030 colorectal cancer is expected to kill more people under forty than any other type of malignancy.

“Colorectal cancer is most treatable when it is found early. So why do we still have 53,000 people a year dying from colorectal cancer?” asks Dr Yatin Patel, gastroenterologist with Southeast Valley Gastroenterology (SEVG). “We already know colorectal cancer is the number three cancer killer, we know screening is key to preventing many of these deaths and we know colonoscopy is the gold standard when it comes to screening,”. So what’s going wrong? The answer isn’t complicated. “A lot of Americans are just not getting screened at all — up to 40% of the population, depending on what state you’re in,” says Dr Patel.
Most cases of colon and rectal cancer occur in older people. But rates have been rising rapidly in younger people. In 2010 people under age 50 accounted for 5% of all U.S. colon cancers; by 2020 this figure had shot up to 11% and by 2030, colon and rectal tumors are expected to kill more people in their twenties through forties than any other type of malignancy.
The evidence is alarming and now the U.S. Preventive Services Task Force (USPSTF), an advisory panel that assesses health practices, has recommended lowering the colonoscopy from age 50 to age 45. The weight of this recommendation is enough that federal law will ultimately require health insurers to cover the 45-to-50 age range. The new guidelines also stress the importance of screening for African Americans, who have the highest rates of colorectal cancer. “Starting at age 45 will prevent additional cases and more lives will be saved by detecting and removing polyps during colonoscopies,” says Dr. Patel.
The updated guidelines apply to people who are at average risk of colorectal cancer — meaning they have no prior diagnosis of colorectal cancer; no family history of the disease or genetic disorders that raise the risk of the disease; no history of precancerous polyps; and no diagnosis of inflammatory bowel disease.
“These new recommendations are very important to help us to protect younger people,” according to Dr. Patel. “But regardless of age, if anyone’s having symptoms they should get their colonoscopy right away. Here at SEVG we have seen plenty of people who’ve come in complaining of symptoms, who would be 40 or in their late 30s. They don’t always have to have classic risk factors,”.

Symptoms of colorectal cancer include weight loss, rectal bleeding and blood in the stool. Another common sign is a change in bowel habits, such as new bouts of constipation or diarrhea. Cramping or abdominal pain, feeling tired or weak, and losing weight without trying are also symptoms of colon or rectal cancer.
This new USPSTF recommendation is now in line with the guidelines issued by the American Cancer Society, and the US Multi-Society Task Force (MSTF) — which represents the American College of Gastroenterology, the American Gastroenterological Association, and the American Society for Gastrointestinal Endoscopy.

While there are different types of screening available, all the published guidelines agree that colonoscopy is the gold standard for screening and detecting the presence of polyps, adenomas (a specific type of polyp) , and colorectal cancer. The multiple studies featured in the USPSTF recommendations show that not all screening options are created equal. “The list of options includes things that nobody actually does,” noted Douglas Rex, MD, director of endoscopy at Indiana University Hospital. “For example, flexible sigmoidoscopy has dropped off the map,and nobody is really doing CT colonography (a medical imaging exam),”.

There is no evidence that offering lots of screening options increases the chance that a patient will get screened. Major studies comparing a single colonoscopy to no screening, show colonoscopy associated with a 68% reduction in deaths from colorectal cancer. We need to get screened starting at age 45 and our best option is the one that works.